Taryn and I used the latest award redemption for business class flights to/from Santiago, Chile over Labor Day Weekend.  I already explained how we booked the flight (check out the details here), so now I’ll share our experience flying in both American Airlines A319 business class and Copa Airlines business class.

One of the benefits of flying in business class is having a dedicated check-in line at the airport.  Since it was a quick Thursday-Monday trip, Taryn and I carried on our luggage and went straight to the security line.

Another benefit of business class is having expedited access through security, but since Taryn and I both have TSA PreCheck, we opted to use the separate PreCheck line instead. In the “normal” security lane, we still would have had to remove our shoes, belts, laptops, liquids, etc., since the expedited access for business class passengers doesn’t waive those frustrating requirements.  So in most instances, TSA PreCheck is actually better than the “priority access” lane for domestic business class flyers.  (We received credit for TSA PreCheck with our Chase Sapphire Reserve card.)

Going through security took maybe five minutes, and we headed straight to the Turkish Airlines airport lounge.  There a number of airport lounges at Dulles airport that offer complimentary entry with our Priority Pass (also a benefit of the Chase Sapphire Reserve card), but the Turkish Airlines lounge is always my go-to.  American Airlines doesn’t have a dedicated lounge at the Dulles airport, and I was a little surprised that we weren’t offered entry in one of their airline partner lounges (like British Airways) instead since we were American Airlines business class passengers.  Yet another example of how beneficial having the Chase Sapphire Reserve card can be!

Not surprisingly, the Turkish Airlines lounge was quite busy, but we grabbed a few beers (and baklava) and found a table upstairs. 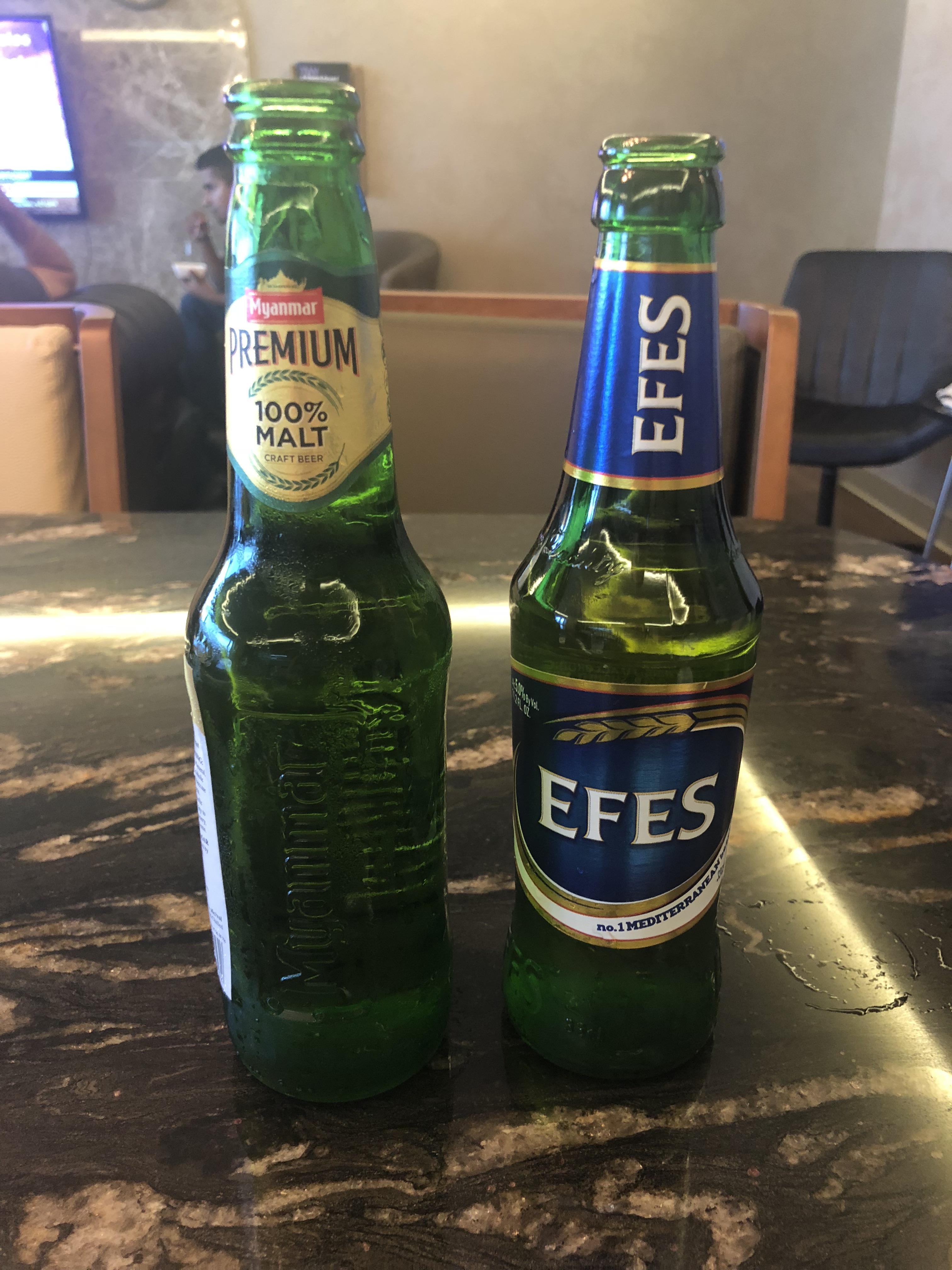 We arrived at the gate about five minutes before the scheduled boarding time, and the gate agents decided to start the boarding process early.  We were ushered onto the plane, sat in our seats, and given a pre-departure drink.  We opted for the champagne (obvi). 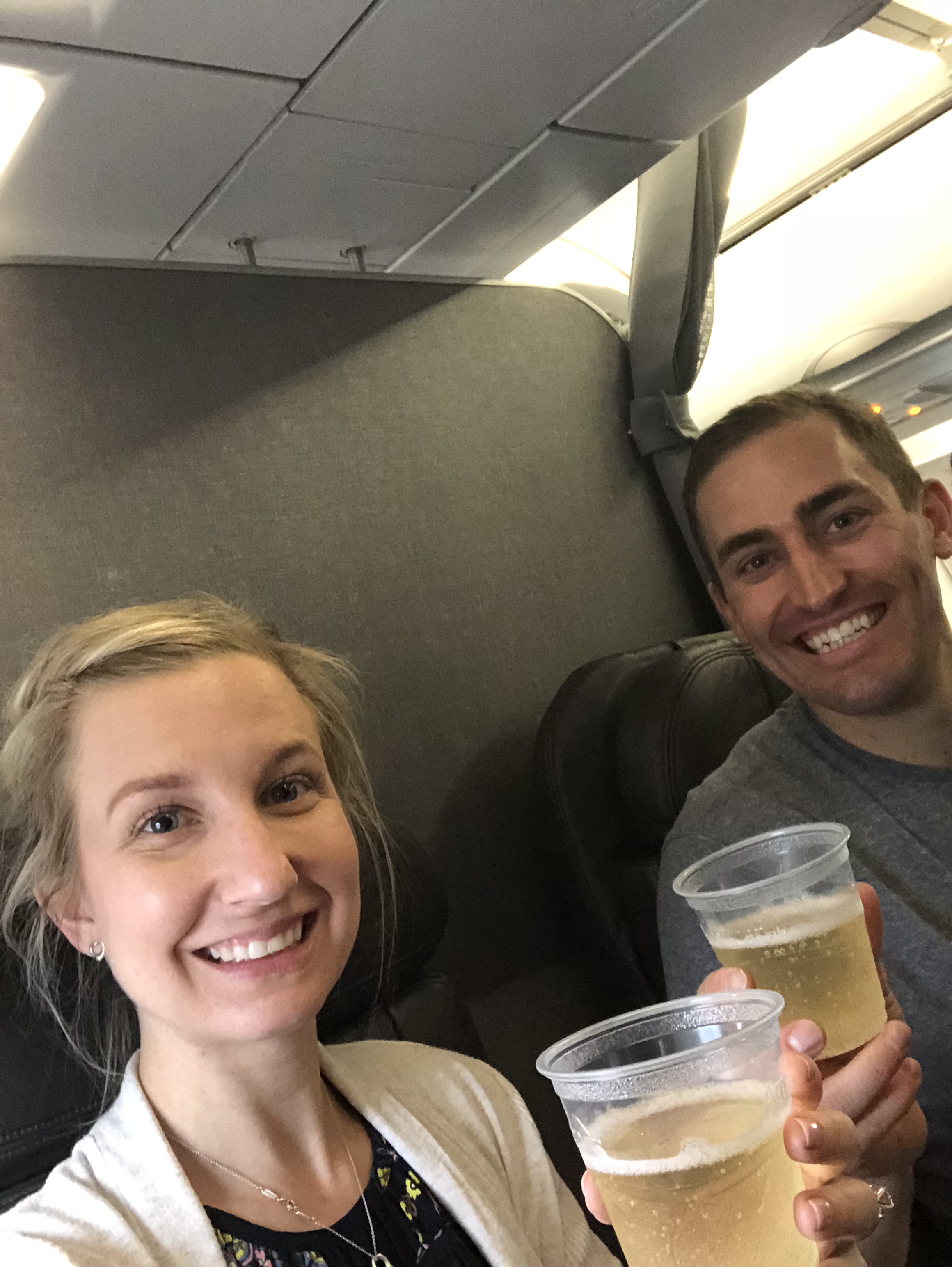 Business-class included eight seats, and we had a dedicated flight attendant for our section of the cabin.  While all of the other passengers settled into their seats, she came by to take our dinner orders and made small talk by asking about the final destination for our travel.  She was genuinely friendly, but not trying too hard.  I went with the beef short rib, and Taryn picked the pasta. 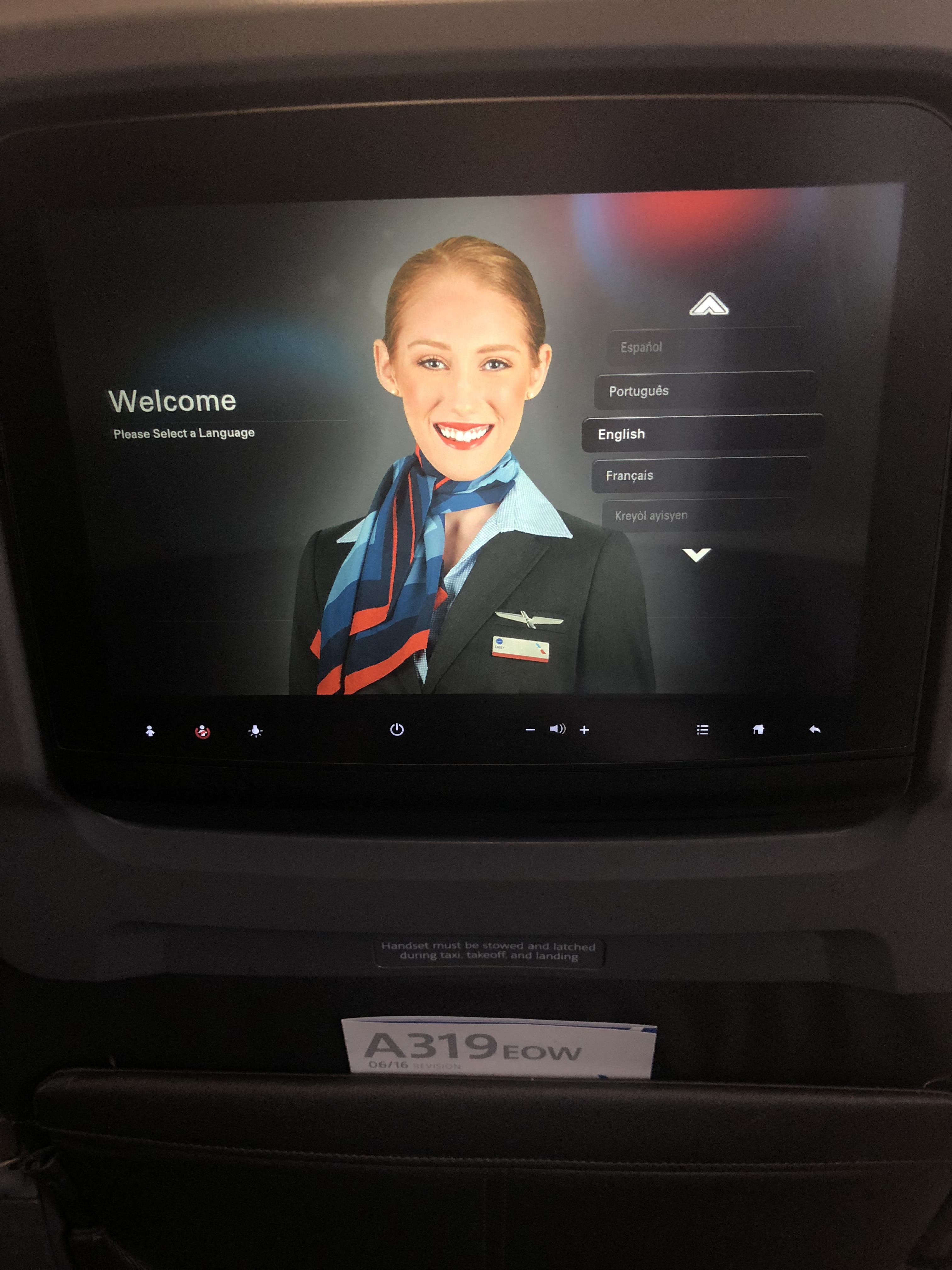 A storm was brewing that evening, and we sat on the tarmac for about 10 minutes before the pilot said we might be delayed to wait out the impending rain.  We only had an hour connection in Miami, so I started to get a little nervous.  But the travel gods went to bat for us, and two minutes later the pilot said we had moved up the priority list for departure and were ready for takeoff.  Big sigh of relief.

After escaping the storm and starting to cruise above the clouds, the flight attendant took our drink orders and gave a small tray of nuts.  I went with red wine while Taryn ordered a gin and tonic. 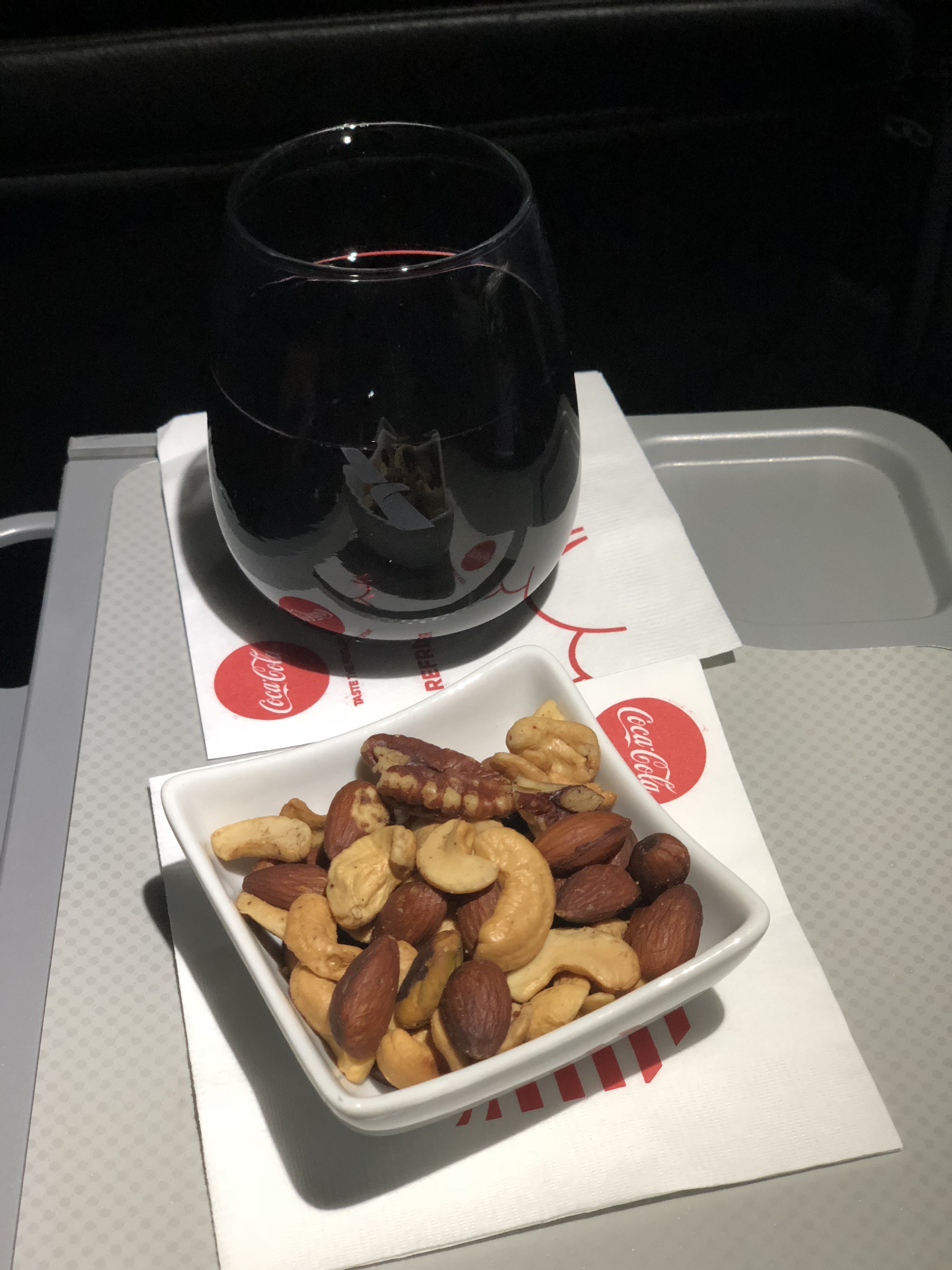 From beer to champagne, to wine.  I swear we do more than just drink.

After handing our drinks, our flight attendant started preparing the meals.  There’s no meal cart in business class, so she took out each tray individually from the galley and delivered the meal to each seat.

Overall, I was very impressed with the service and the presentation.  The meal included a side salad, focaccia bread, beef short rib with chimichurri sauce, and a (twice baked?) potato.  I’ll admit that I had low expectations for a domestic business class flight, and I didn’t expect a meal this nice.  That short rib was legitimately awesome. 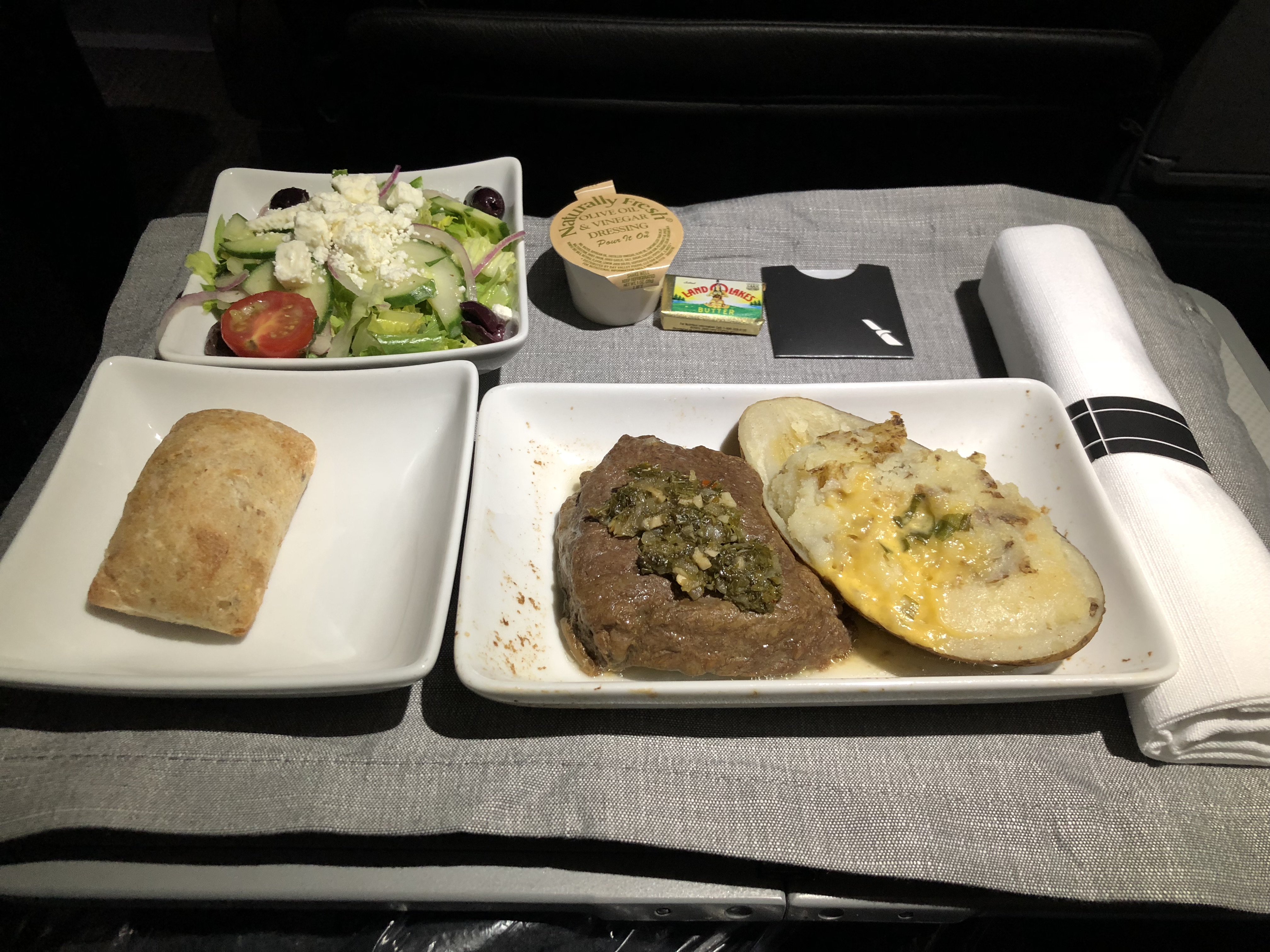 I thought our meal on the overnight flight to Chile was going to be the best one, but dinner on our short flight to Miami easily takes the cake.

Taryn also enjoyed her pasta but wasn’t as excited as I was about my meal. 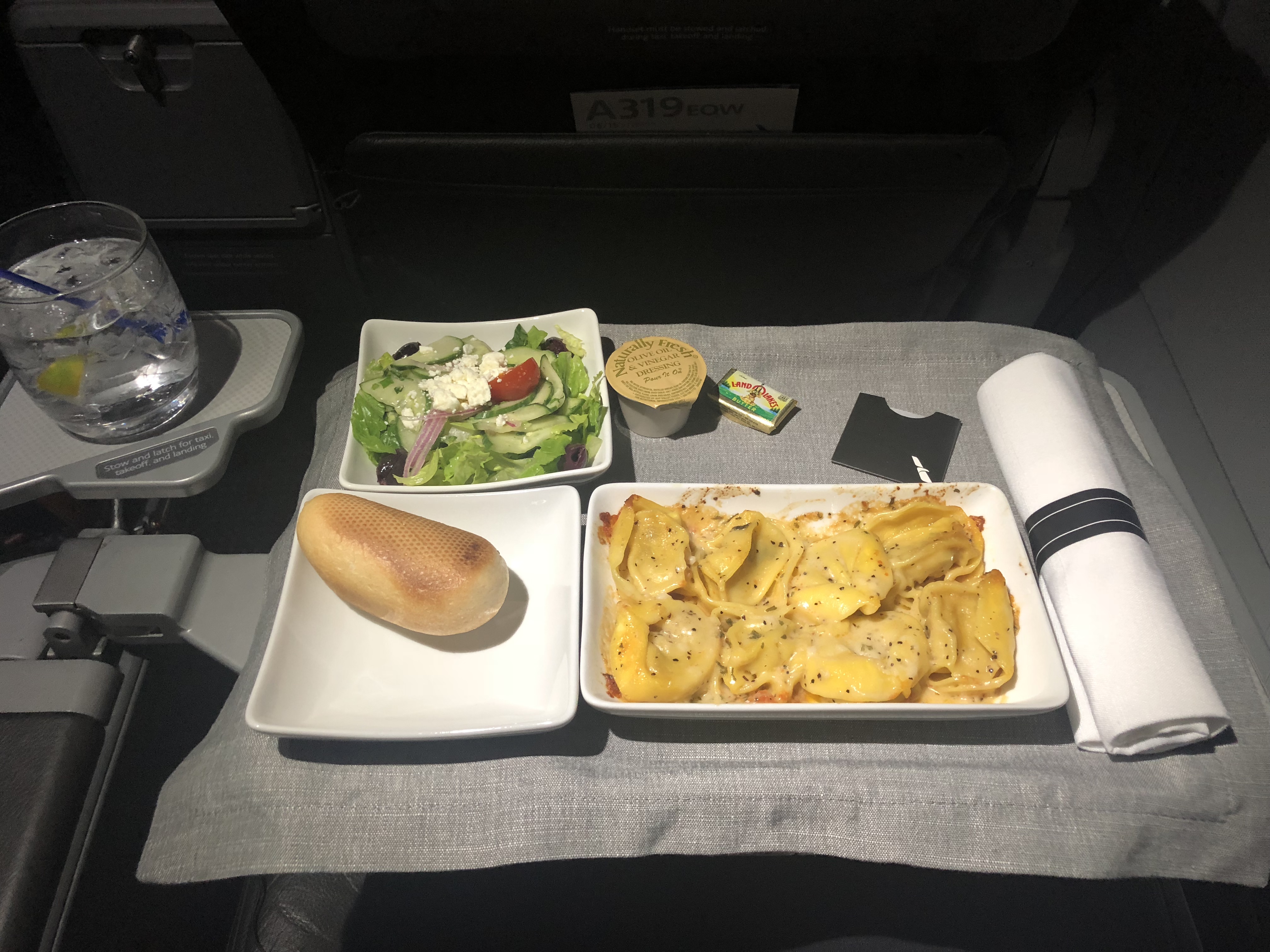 What I also really liked was the separate, elevated mini-table meant designed for passenger’s drinks.  I’m notorious for knocking over glasses of water on my tray table, so these handy mini-tables were awesome. 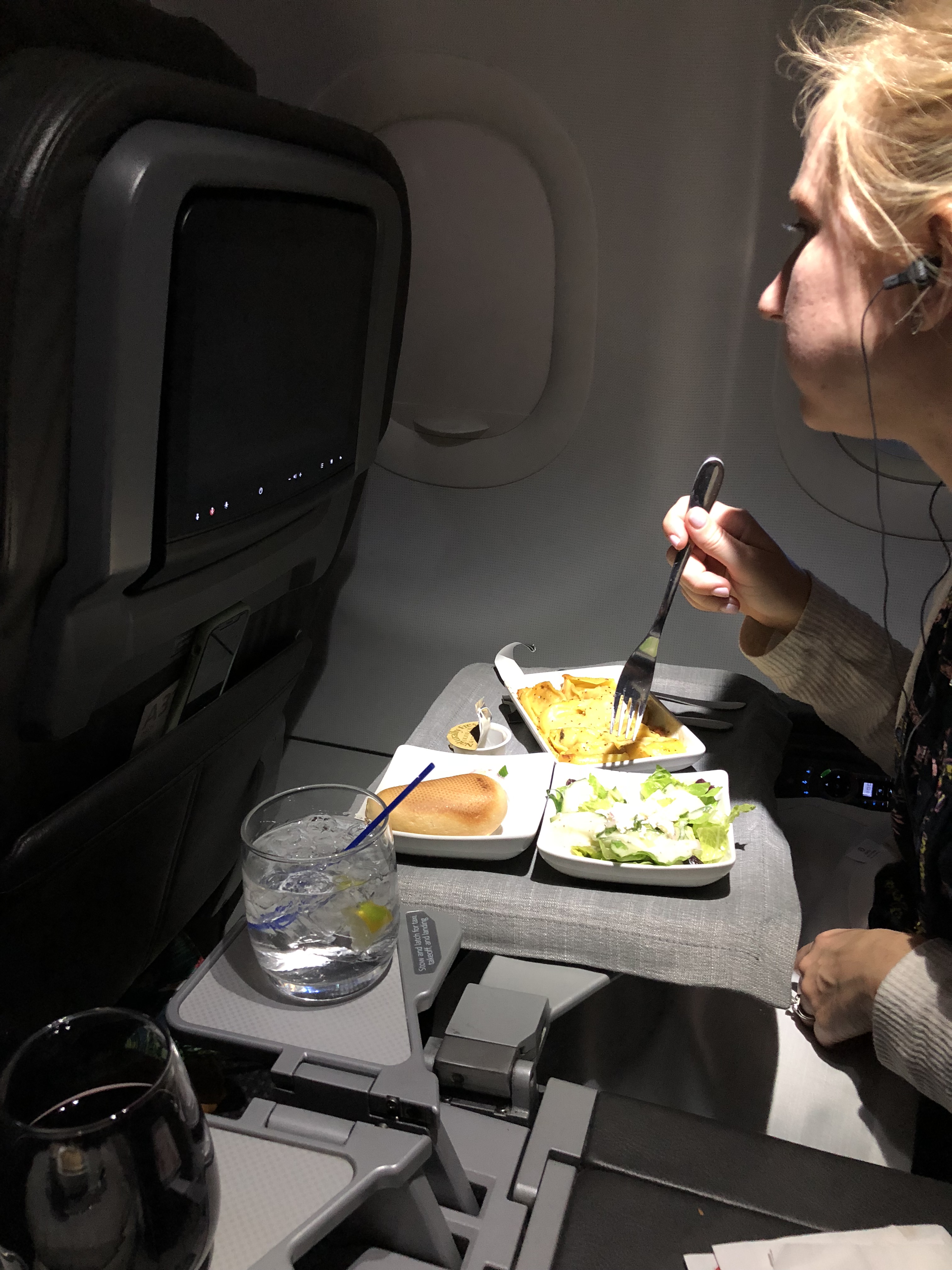 I was already super impressed with the whole experience – the friendly flight attendant, the food, the new(er) seats.  But as I was on my third episode of Modern Family, I smelled cookies being baked from the galley.  Sure enough, five minutes later, the flight attendant delivered warm cookies as a dessert. 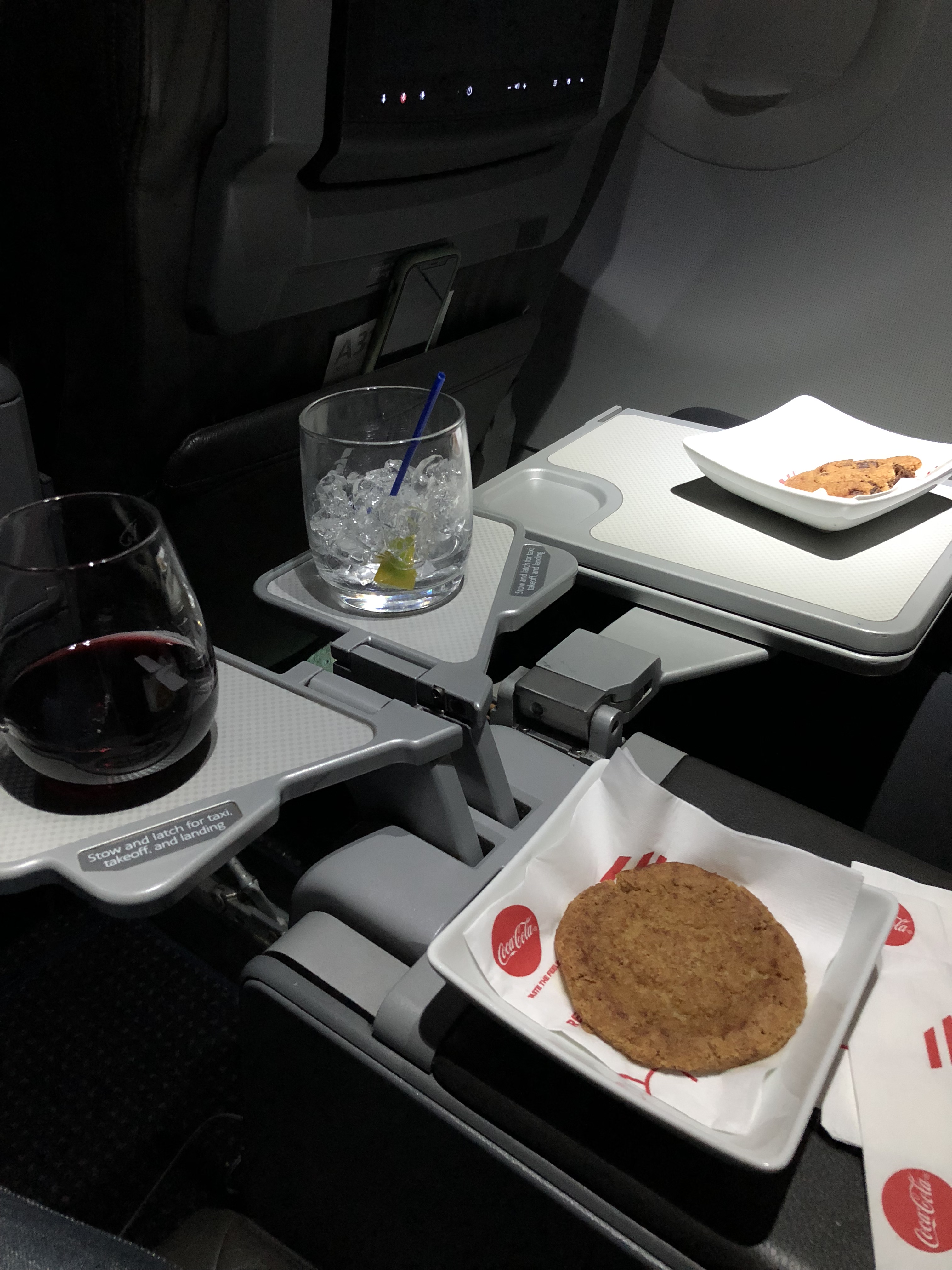 Warm cookie for dessert.  Since when did a 2.5-hour domestic flight become this nice?

Warm cookies for dessert was definitely the cherry on top of a great flight.   It was only 2.5 hours, but it was one of the most pleasant short-haul business class flights we’ve flown.  Maybe that’s because my expectations were so low.  U.S airlines are notorious for being cheaper and less luxurious when compared to European or Asian airlines.  The “Big Three” U.S. airlines have been trying to revamp their service and products (especially in business class) to compete, and if they offer the same experience as we received on our flight, American Airlines will be able to compete with the best of them.

Be on the look-out for our next post, which reviews our business class flight aboard the American Airlines Boeing 777 overnight flight from Miami to Santiago, Chile.

A breakdown of how we booked our latest international adventure with credit cards points in business class to Santiago, Chile. 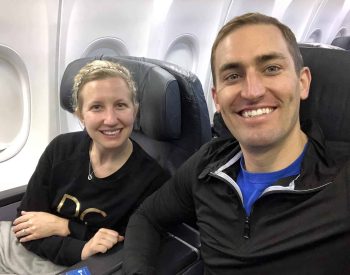 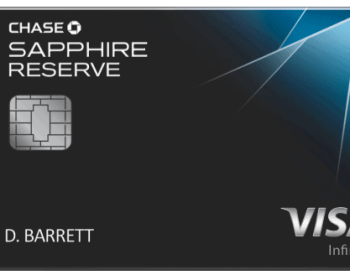 I just wrote about the Southwest Rapid Rewards credit cards offered by Chase.  And now I’ll share a bit more about the Chase Sapphire Preferred… 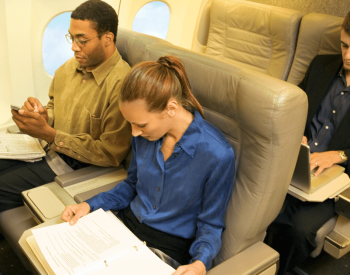 3 Frequent Flyer Tips To Help You Fly Like A Pro

As much as we love to travel, we know that flying can get frustrating at times. Don’t you worry because we’ve listed down three frequent…