A Review of our Inter-Asian flights on Silk, Cathay, Bangkok Airways. For short flights, they can still be great value redemptions using credit card points.

Obviously, flying Emirates or Singapore Airlines with lie-flat seats is always preferred. But guess what? For short flights, airlines don’t want or need to include onboard bars, amenity kits, or extensive menus.

Which is why we flew Silk Air, Cathay Dragon, and Bangkok Airways when traveling within Southeast Asia. These short flights are more comparable to domestic business class within the United States rather than the crazy business class cabins we see on Facebook. But they can be still be great value redemptions when spending credit card points and are also interesting to compare.

That’s not to say Silk Air is a bad flying experience; it’s just not Singapore Airlines.

Case in point: we boarded the plane from the tarmac via a staircase.

I always like boarding aircraft straight from the ground. Maybe because that’s how we see the President board Air Force One and celebrities board their private jets. But having a separating board gate or jetway for business class passengers is hard to beat.

The business class cabin was fairly small, consisting of three rows of 2×2 seats. We were seated in the last row.

The seats were comfortable and completely adequate. But nothing to write home about. Not surprisingly, they were comparable to our previous domestic business class seats on United Airlines.

Rather than having individual menus at each seat, the flight attendant handed out menus as he took orders. Normally that would be awkward and time consuming, but since the business class cabin was only about 1/2 full, it wasn’t so bad.

There were two meal options: the friend rice or scrambled eggs. Perfectly fine, but you could tell our flight wasn’t this menu’s first rodeo. Maybe the flight attendant kept the menu in his back pocket and accidentally sat on it?

After take off, the flight attendant took drink orders and distributed meal trays.

We both opted for the scrambled eggs, since it was early morning in Singapore and breakfast fried rice didn’t sound appetizing. The meal was perfectly adequate.

There’s nothing fancy about breakfast food, but I seriously love it. I also liked having the fresh fruit, since I tend to eat nothing but carbs when I travel.

I had about an hour or so left in the flight, so I explored what I could of the business class seat. The seat controls were fairly basic, but did include a few various options.

The seat control buttons weren’t electronic. So when you pressed the “recline” button, you would have to push your weight back into the seat in order to actually have the seat recline. The same went for the footrest extension, for example. Sorta weird and not the most convenient, but it got the job done.

Rather than seatback TVs, the flight attendant offered iPads with preloaded entertainment. To be honest, iPads are probably easier to operate and able to include more options, but it seemed slightly tacky.

Overall, the flight was perfectly fine. Would I go out of my way to fly Silk Air? Definitely not. Would I redeem airline miles to fly business class with Silk Air again? Yes, absolutely. Because flying in Silk Air business class allows you to take advantage of the Singapore Airlines business class lounges at the Singapore airport. We didn’t get to partake because of our early morning departure, but the lounges are among the best in the industry and worth the experience.

Much like the Silk Air-Singapore Airlines relationship, Cathay Dragon is the regional subsidiary for Cathay Pacific Airways. We expected the experience on Cathay Dragon to be comparable to Silk Air, but Cathay Dragon was noticeably better.

For example, Cathay Dragon proudly served a signature drink, the Dragon Sunrise. The menu described it as “a refreshing combination of gin with fresh guava and lemon juice.” SOLD!

For our 2.5 hour flight from Siem Reap to Hong Kong, there were only eight business class seats. And since only a few other seats were taken, it was like we had the cabin to ourselves.

What blew me away was the menu. For the Silk Air flight, we received a communal menu that included two different breakfast options. But on Cathay Dragon, we each received a 6+ page menu that included an introduction to the airline’s culinary team, a listing of the courses, a soft drink list, a champagne and wine list, and finally an aperitif/cocktail list.

And not only was the menu extensive, but it also included an appetizer, main entree, and dessert.

The meal presentation was about the same as Silk Air and included a bread plate, butter, salt/pepper shakers, metal utensils, and glasses. After clearing plates, the flight attendant then handed out the ice cream.

Obviously, serving breakfast is different than serving lunch or dinner. But I was VERY impressed with Cathay Dragon’s overall business class experience. Maybe Silk Air lowered my expectations for these regional subsidiary airlines, but Cathay Dragon didn’t skip a beat.

The A320 aircraft also included seatback TVs, which paired well with our after-dinner gin & tonic.

We flew with Cathay Dragon again after we left Hong Kong and went to Myanmar.

While we didn’t get to enjoy the airport lounges in Singapore, we had a few hours to kill at the Hong Kong airport. Cathay Dragon business class passengers have access to the Cathay Pacific lounges, so we decided check out “The Wing,” one of the most lauded of the airport’s lounges.

The lounge would put any United Club, Delta Sky Club, or American Airlines Admirals Club to shame. The Cathay Pacific lounge was huge, incredibly polished, and included multiple specialty food areas, including a “coffee loft” and a noodle bar.

We checked Facebook, ate some noodles, and rest in the lounge before our flight.

Among our flights within SE Asia, this one was our longest at just over three hours. The longer flight meant a larger aircraft with 26 business class seats.

The aircraft was different, but it had the same general setup as our first Cathay Dragon flight.

Again, the menu came in a small booklet and included multiple courses.

However, because the meal consisted of both a salad and an appetizer, the meal was served in two separate platings.

After clearing plates, the flight attendant then passed out the ice cream.

The experience with Cathay Dragon was head and shoulders above Silk Air. It wasn’t even close. I’ll DEFINITELY go out of my way to fly Cathay Dragon within SE Asia again.

Yes… we even flew economy during our RTW trip.

But it was a good lesson that economy flights (especially overseas) can be more more enjoyable than flying on a United Airlines basic economy ticket in the United States.

The flight was only about an hour, so we boarded a small puddle jumper for the quick flight to Chiang Mai.

There weren’t a lot of options for non-stop flights between Yangon and Chiang Mai; only a couple local Burmese airlines and then Bangkok Airways.

I note that Bangkok Airways is NOT Thai Airlines. It doesn’t belong to any airline alliance, and there wasn’t an easy way for us to cheaply redeem airline miles. But since the flight was relatively cheap ($140 each) and we really didn’t want to waste precious vacation time on a layover, we pulled the trigger for the short Bangkok Airways flight. It can’t be that bad, right?

Much to our surprise, the flight came with a full meal.

The complimentary spring roll was our first Thai meal, and it was a great introduction to what was about to come. Even in economy class onboard a mid-tier Asian airline, THAI FOOD IS DELICIOUS. The meal also included fruit and free beer as well.

The cabin wasn’t the most modern, and the ink marks on the tray table indicated that the aircraft could probably use a good cleaning. But would I fly Bangkok Airways again? If it meant avoiding two separate flights and a layover, probably.

Can you imagine if an American airline gave free meals and booze to economy passengers? They’d be the most popular airline in the country. And there we were, enjoying our Thai spring roll and sipping on Thai beer. I wouldn’t call it business class, but Bangkok Airways exceeded our low expectations.

Highlights from our around-the-world adventure: Our Around-the-World Trip 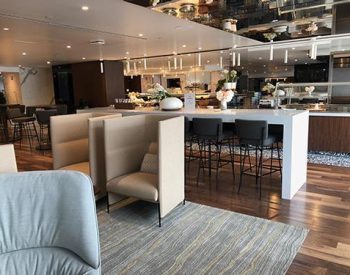 Redeeming Credit Card Points To Book Our Flight to Bali

Details of our Bali vacation funded by credit card points. Roundtrip in business/first class and a free hotel!

A review of the Citi ThankYou Premier credit card. 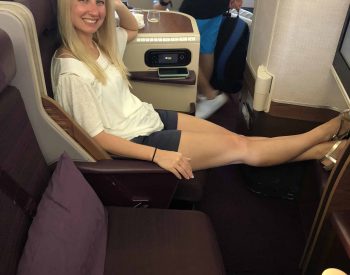 Chiang Mai to Bangkok to Tokyo A review of our Thai Airways 777 business class flight from Chang Mai, to Bangkok, to Tokyo. Three weeks… 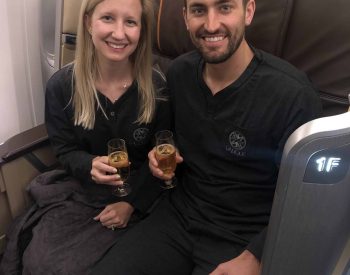